Merging the fields of biology, technology, and medicine

The rapid growth in data is astounding in terms of volume, speed, veracity and variety of data sources from genome sequencing experiments, biological and biomedical imaging that generate large volumes of data. The ability to store, process, analyse and view this data is gaining momentum in the Western Switzerland‘s healthcare industry. The Swiss pharmaceutical industry recognises that bioinformatics is crucial for validating potential drug targets and for determining which ones are the most suitable for entering the drug development pipeline1.

Switzerland is among the top ten industrialised countries in the world in terms of ICT readiness and one of the big data development hubs for Life Sciences2. The global bioinformatics market ac counted for $4.2 billion in 2014 and is poised to reach $13.3 billion by 2020 with a CAGR of 20.9% from 2015 to 20203 driven by the increasing use of bioinformatics in drug discovery and biomarkers development processes which could lead to a reduction in R&D costs for new drugs by 50%4. Switzerland has the highest concentration of bioinformaticians worldwide.

The Swiss Institute of Bioinformatics (SIB) whose services, software tools and databases are used worldwide by researchers in Life Sciences with more than 900'000 requests per month, created the first web server in Life Sciences known as ExPASY.

The Human Brain Project (HBP)5, a 10-year scientific research project, established in 2013, federates hundreds of researchers, from 112 partner institutions in 24 countries, is coordinated by the Swiss Federal Institute of Technology in Lausanne (EPFL). The HBP enables data sharing, reconstruction of the brain at different biological scales and the development of brain-inspired computing systems.

The Lausanne Institutional Biobank (BIL) is currently developing Europe’s largest biobank with biological samples donated by the general population. A bioressource for research purposes, sequencing is being used to understand population-based medicine and move towards personalised medicine.

“Big Data” has proliferated Western Switzerland’s bioinformatics companies such a s SOPHiA GENETICS and Quartz Bio that specialise in outsourcing services such as sequencing or prospecting for disease-specific biomarkers into a predictive tool.

BioAlps region brings together more than 1'000 people as big data practitioners, researchers, students, clinicians, health IT experts, and data scientists to improve the state of our healthcare systems.

Western Switzerland, yet again, is demonstrating that it is a hotbed of innovation and excellence by delivering on the promise with big data infrastructure investments and tools of the highest scientific standards. 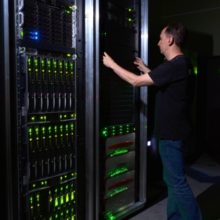 The Swiss Institute of Bioinformatics (SIB) is an academic, non-profit foundation established by leading researchers in 1998 with the backing of a few visionary Swiss politicians. With offices on the campus of the University of Lausanne (UNIL), SIB is at the frontier of Life Sciences and computer science. The organisation provides high quality bioinformatics resources and services to the national and international Life Sciences community and coordinates research and education in bioinformatics throughout Switzerland.

SIB has 16 institutional members, which span all the major universities of Switzerland and other research institutions. It's 56 research and service groups develop, maintain and provide core bioinformatics resources for all areas of the Life Sciences. SIB belongs to several prestigious international networks, such as the Global Alliance for Genomics and Health and the European Life Sciences Infrastructure for Biological Information (ELIXIR).

Brains, data and the life sciences – a strong cocktail in the bioalps region

Working hand in hand with companies, the research institutions in Western Switzerland provide a wealth of big data knowledge and bioinformatics tools that span all disciplines of the Life Sciences, not just human health.

The non-exhaustive lists below showcase some examples of the work being done in the region.

Find more information in our extensive databases: bioalps.org/community and, for the six Alpine regions, alpslifesciencesearch.com

School of medicine, department of genetics and evolution

CYTEL
Statistical software for designing every type of clinical trial, including adaptive designs

SIMPLICITYBIO
In-silico biomarker diagnostics based on genomics and proteomics

GENEBIO
Multifaceted informatics for the life sciences; commercializes products developed by the SIB

The fact sheet provides a view of the key players in the sector at any given time; it is not comprehensive and is subject to regular updates.
This current edition was produced in Autumn 2019.

Join our network and let us know what you are doing