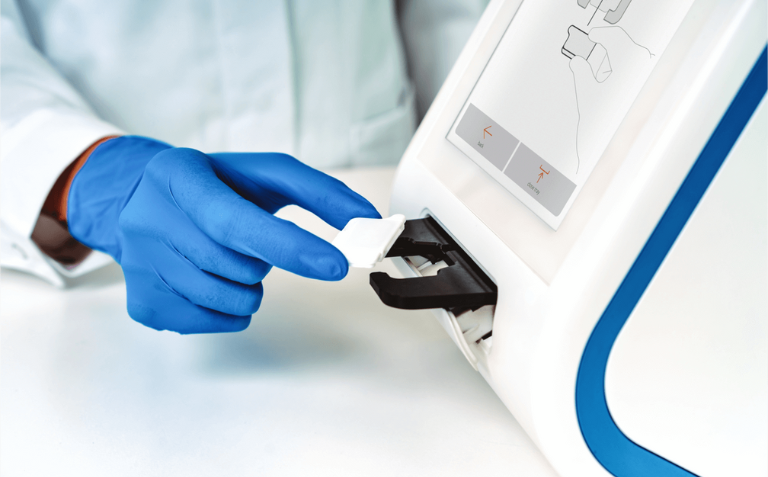 Abionic’s test identifies in 5 minutes the earliest signs of sepsis 3 days before the standard of care. The technology just received a European IVDR certification for its in-vitro diagnostics.

Abionic SA, a developer of disruptive nanotechnology-based diagnostic solutions, announces that its Pancreatic Stone Protein (PSP) test on the abioSCOPE® has been certified by BSI certification agency as complying with the European In-vitro Diagnostic Regulation (IVDR), EU 2017/746. This certification granted by notified bodies like BSI is required for in-vitro diagnostics to continue being sold in the European Union.

Pancreatic Stone Protein (PSP) on the abioSCOPE® is the earliest marker of sepsis, allowing for its identification up to 72 hours before the standard of care. The procedure only takes in 5 minutes.

Abionic’s cutting-edge nanotechnology enhances the efficiency and versatility of standard ELISA tests to deliver optimal point of care (POC) treatment options by reducing current biological measuring techniques from the macroscale down to the nanoscale in a multi-analyte environment. Abionic’s In Vitro Diagnostic (IVD) platform provides lab-quality ultra-fast results from a single drop of a patient sample (saliva, blood, urine, etc.) at the POC, enabling personalized diagnostics and opening the window of opportunity for immediate treatment. The company is mainly active in acute care and in primary care (COVID-19, allergy, iron deficiency) businesses.

Preventing the overuse of antibiotics

Dr. Samir Vora, infectious disease physician, Geneva, Switzerland, commented: “The PSP assay has the potential to help the physician decide whether or not to start antibiotic therapy, and thus contribute to reducing the two major public health problems of sepsis and antimicrobial resistance.

Studies have shown that antibiotic therapy is incorrectly prescribed in as many as 60% of patients receiving hospital care and is likely to be even higher outside this environment (Luyt et al., Critical Care, 2014). Aside from contributing to resistance, inappropriate antibiotic use may lead to increased mortality and severe disease, increased healthcare costs, increased lengths of stay in hospital, and the need for more complex treatments leading to a higher risk for adverse effects and unwanted drug interactions.

The American market in the target

Two years after the commercial launch of its sepsis test, Abionic’s expansion is reaching a global scale. With over 50 markets already covered, Abionic’s next big step is the U.S. where sepsis represents the single largest cost to the healthcare system. Clinical trials to support FDA 510(k) submission are well underway. “As we gear up for FDA clearance, it’s very motivating to see how excited the U.S. ecosystem is about our novel approach to detecting sepsis and its potential impact on lifespan and healthcare costs.” said Nelson Dumas, Director of the U.S. Subsidiary of Abionic.