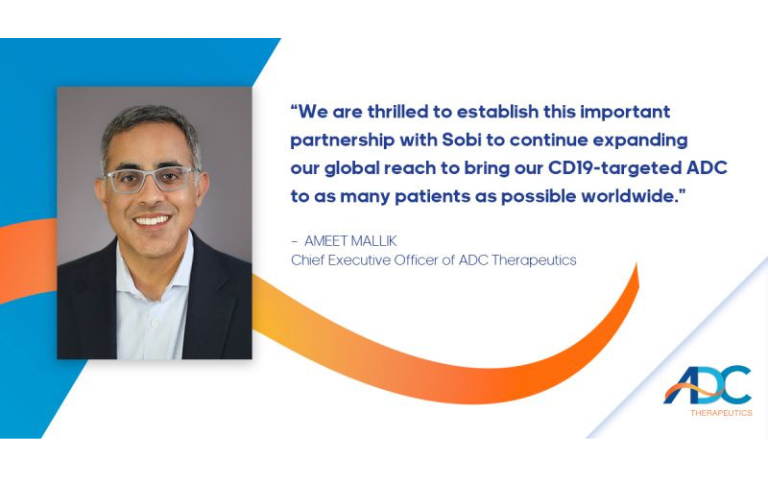 The swiss and the Swedish companies partner for the development and commercialization of ZYNLONTA®, a drug for hematologic and solid tumors

ADC Therapeutics SA has entered into an exclusive license agreement with Swedish Orphan Biovitrum AB (Sobi®) for the development and commercialization of ZYNLONTA® for all hematologic and solid tumor indications outside of the United States, Greater China, Singapore and Japan. The Marketing Authorization Application was validated by the European Medicines Agency (EMA) at the end of October 2021, and orphan drug designation was granted for the treatment of diffuse large B-cell lymphoma (DLBCL) in Europe. ADC Therapeutics and Sobi intend to make ZYNLONTA® available following a regulatory decision that is expected by the first quarter of 2023.

Under the terms of the agreement, ADC Therapeutics will receive an upfront payment of $55 million, and is eligible to receive $50 million upon regulatory approval of ZYNLONTA® in third-line DLBCL by the European Commission and up to approximately $330 million in additional regulatory and sales milestones. ADC Therapeutics will also receive a percentage of royalties ranging from the mid-teens to the mid-twenties based on net sales of ZYNLONTA® in Sobi’s territories. Sobi will share a portion of select global ZYNLONTA® clinical trial costs.

“We are thrilled to establish this important partnership with Sobi to continue expanding our global reach to bring ZYNLONTA® to as many patients as possible worldwide,” said Ameet Mallik, Chief Executive Officer of ADC Therapeutics. “Sobi has a strong global commercial infrastructure, proven capabilities in the areas of hematology and rare diseases, and importantly, shares our passion for improving the lives of patients.”

Guido Oelkers, Chief Executive Officer of Sobi, said, “ADC Therapeutics has an innovative and validated technology platform and is a leader in the evolving field of antibody-drug conjugates. We are delighted about this collaboration to bring loncastuximab tesirine to Europe and beyond to serve an unmet need in debilitating orphan diseases in hematology.”

ADC Therapeutics is based in Lausanne (Biopôle), Switzerland and has operations in London, the San Francisco Bay Area and New Jersey. ADC Therapeutics is a commercial-stage biotechnology company improving the lives of those affected by cancer with its next-generation, targeted antibody drug conjugates (ADCs). The Company is advancing its proprietary PBD-based ADC technology to transform the treatment paradigm for patients with hematologic malignancies and solid tumors.

ZYNLONTA® is a registered trademark of ADC Therapeutics SA.

Sobi is a specialised international biopharmaceutical company transforming the lives of people with rare diseases. Providing sustainable access to innovative medicines in the areas of hematology, immunology and specialty care, Sobi has approximately 1,600 employees across Europe, North America, the Middle East and Asia. In 2021, revenue amounted to SEK 15.5 billion. Sobi’s share is listed on Nasdaq Stockholm.

ZYNLONTA® is a CD19-directed antibody drug conjugate (ADC). Once bound to a CD19-expressing cell, ZYNLONTA® is internalized by the cell, where enzymes release a pyrrolobenzodiazepine (PBD) payload. The potent payload binds to DNA minor groove with little distortion, remaining less visible to DNA repair mechanisms. This ultimately results in cell cycle arrest and tumor cell death.

In April 2021, the U.S. Food and Drug Administration (FDA) has approved ZYNLONTA (loncastuximab tesirine-lpyl) for the treatment of adult patients with relapsed or refractory (r/r) large B-cell lymphoma after two or more lines of systemic therapy, including DLBCL not otherwise specified, DLBCL arising from low-grade lymphoma and also high-grade B-cell lymphoma. The trial included a broad spectrum of heavily pre-treated patients (median three prior lines of therapy) with difficult-to-treat disease, including patients who did not respond to first-line therapy, patients refractory to all prior lines of therapy, patients with double/triple hit genetics and patients who had stem cell transplant and CAR-T therapy prior to their treatment with ZYNLONTA®. This indication is approved by the FDA under accelerated approval based on the overall response rate and continued approval for this indication may be contingent upon verification and description of clinical benefit in a confirmatory trial.

ZYNLONTA® is also being evaluated as a therapeutic option in combination studies in other B-cell malignancies and earlier lines of therapy.

Debiopharm signs an new IDEAL agreement with the University of Geneva

Dexter®, the Swiss surgery robot, makes its way to Germany