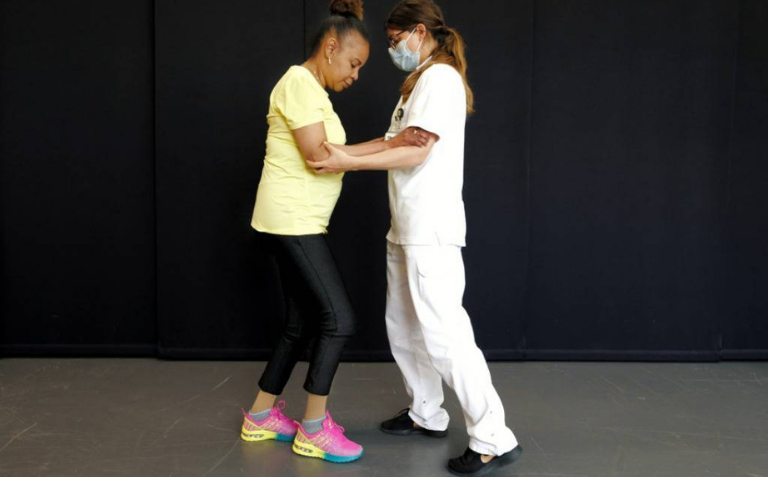 An electronic implant helps a bedridden patient to walk again

Researchers at the NeuroRestore research center in Lausanne Switzerland helped a patient suffering from a neurogenerative disease to leave her bed without fainting.

Jocelyne Bloch, neurosurgeon at the CHUV and professor at the UNIL in Lausanne Switzerland, and Grégoire Courtine, professor in neurosciences at the EPFL, and their teams, have enabled a 48-year-old woman suffering from MSA-P (Parkinson’s type multiple system atrophy) to stand up and walk again. In addition to tremors and speech problems, this disease prevents the Baroreflex, which regulates blood pressure, from functioning properly. When the patient stands up, the vasoconstriction of the arteries in the lower body does not occur, resulting in syncope and a potentially dangerous fall. She is thus obliged to remain lying down in order not to lose consciousness.

Electrodes and an improved pacemaker

“We placed a field of electrodes on a silicone support and implanted it against the spinal cord in the lower thoracic region, where there is a large concentration of neurons involved in the Baroreflexes. This tab is connected to a pacemaker which, in addition to emitting electrical impulses, is equipped with accelerometers that detect the patient’s postures and the challenges of orthostatic hypotension. The stimulation is adapted accordingly”, explains Grégoire Courtine. The patient’s quality of life has been drastically improved. “Now, when she gets up, the pressure drop occurs in about 10 minutes, instead of 30 seconds to 1 minute before. She can walk 200 to 300 m and has gained autonomy. The number of syncopations has also decreased, from 2 to 3 per day to about one per week,” explains the researcher.

For neurosurgeon Jocelyne Bloch, this advance opens up important clinical perspectives in the management of degenerative diseases. “We knew about the applications of this therapy in people who suffered from a lesion due to a trauma of the spinal cord. With this discovery, we can now also treat people whose deficits are caused by neurodegeneration. This is the first time that we have been able to improve the pressure regulation mechanisms of people with MSA.”

The device was first developed to treat pain problems and not to specifically help people with orthostatic hypotension . “We hope to be able to launch a clinical study soon with 20 to 30 patients and to develop, in partnership with the company Onward, a dedicated implant”, concludes Grégoire Courtine.