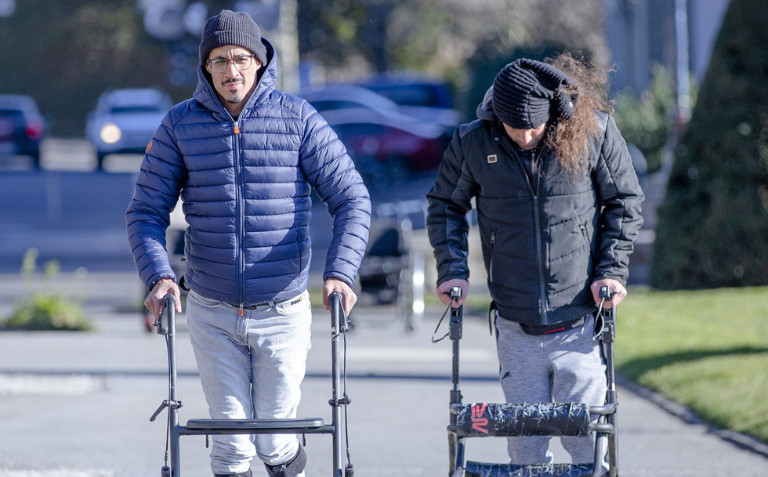 Bone marrow neurons can be rewired to enable paraplegics to walk

Jocelyne Bloch and Grégoire Courtine, two Swiss researchers, have identified a group of nerve cells unrelated to the locomotor system with the capacity to change function

A new study by scientists at the .NeuroRestore research center has identified the type of neuron that is activated and remodeled by spinal cord stimulation, allowing patients to stand up, walk and rebuild their muscles – thus improving their quality of life. This discovery, made in nine patients, marks a fundamental, clinical breakthrough. The study was published in Nature.

Work coordinated over several years by Grégoire Courtine of EPFL and Jocelyne Bloch of CHUV has already shown that targeted stimulation using electrodes placed on the region of the spinal cord that controls the leg muscles enables patients paralysed by a spinal cord injury to regain some mobility. In their new study, published today in “Nature”, they show not only that this therapy is effective in nine patients, but also that at the end of the rehabilitation process, the improvement in the patients’ motor skills persists even in the absence of electrical stimulation.
This neurological recovery suggests a regrowth and reorganisation of the nerve fibres involved in walking. For the researchers, it was therefore crucial to understand precisely this reorganisation in order to further improve the treatments to benefit a maximum number of patients. The scientists therefore studied this recovery in a rodent model, which enabled them to identify a surprising family of neurons, the Vsx2: they are not particularly solicited for walking in healthy individuals, but prove to be essential for their recovery after a spinal cord injury.

Molecular atlas of the spinal cord

For the first time, the researchers were able to visualise the activity of the human spinal cord during walking. This precision allowed them to make a surprising observation: while the patients’ spinal cord is stimulated, its activity during walking decreases as recovery takes place. The scientists hypothesised that this activity reflected the selection of certain neurons dedicated to functional recovery. To test this possibility, they set up a state-of-the-art molecular technology: “For the first time, we have been able to establish a molecular atlas of the spinal cord that is so precise that it allows us to observe, neuron by neuron, the evolution of the recovery process,” stresses Grégoire Courtine, professor of neuroscience at EPFL and co-director of the NeuroRestore centre.
Thanks to the precision of this atlas, the researchers have shown that stimulation of the spinal cord activates this type of specific neuron, and that the importance of these neurons increases with the recovery process. To validate this discovery, Stéphanie Lacour, also a professor at EPFL, augmented her laboratory’s implants with a series of light-emitting diodes that not only stimulate the spinal cord, but also exclusively inactivate Vsx2 neurons using optogenetics (a technique that allows light stimulation to specifically and locally alter a limited number of cells genetically modified to be sensitive to it, without disturbing the state of neighbouring cells).
In mice suffering from a lesion, this inactivation of Vsx2 neurons immediately stopped walking, whereas it had no effect on healthy mice. This indicates that Vsx2 neurons are both necessary and sufficient for the electrostimulation treatment to be effective and lead to the reorganisation of the nervous system.

Understanding the specific functions of each subpopulation of neurons during a complex activity such as walking is a fundamental challenge in neuroscience,” says neurosurgeon Jocelyne Bloch, co-director of NeuroRestore. This new work, validated with the nine patients who were able to regain some mobility thanks to our implants, allows us to better understand the process of spinal cord reorganisation. Jordan Squair, who focuses on regenerative therapies at NeuroRestore, adds: “This opens up even more targeted therapeutic opportunities: we aim to manipulate these neurons to regenerate spinal cord injuries.